THE YEAR STARTED OFF ON A HIGH NOTE IN THE SOUTHERN NEW JERSEY & PHILLY CRE MARKETS, THEN COVID-19 CREATED CHAOS

Predictions for 2020 Had Been Bullish, But are Now a Great Unknown 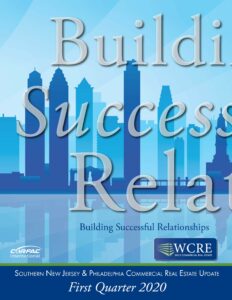 Commercial real estate brokerage WCRE reported in its analysis of the first quarter of 2020 that the Southern New Jersey and Southeastern Pennsylvania markets continued their years-long strong performance at the outset of the new decade. But by March it was clear that, just as every other area of life would be disrupted by the Covid-19 pandemic, the CRE market would not be immune. The quarterly performance still showed positive news, but the effects of the crisis began taking hold during the last weeks of Q1, so the true impact hadn’t become fully apparent. Vacancy rates across every property type remain low, and, while rent increases have cooled somewhat, growth remained positive for the quarter. Even before the pandemic struck many feared there were signs that the decade-long expansion was nearing its end. But even as growth slowed down, the economy appeared to be moving forward at a fairly solid pace before the crisis.

“Initially the assumption was that the worst of the coronavirus outbreak would directly impact the regions in Asia where it first was identified, and that the impact to the U.S. would come in the form of disruption of supply chains and slower economic growth abroad,”
said Jason Wolf, founder and managing principal of WCRE.

“While those shocks have happened, the rapid spread of the virus within the US and around the world has impacted the global economy, and those effects are still becoming apparent throughout our local and regional CRE markets.”

There were approximately 374,429 square feet of new leases and renewals executed in the three counties surveyed (Burlington, Camden and Gloucester), which was up more than 80 percent over the previous quarter. The sales market stayed active, with about 1.02 million square feet on the market or under agreement. Completed sales were up about ten percent over the previous quarter, at approximately 866,444 square feet trading hands.

New leasing activity accounted for approximately 47 percent of all deals for the three counties surveyed. Overall, gross leasing absorption for Q1 was in the range of 110,000 square feet, up about 25 percent over the fourth quarter.

● Overall vacancy in the market is now approximately 11.2 percent, which is significantly improved from the previous quarter, and still near a 20-year low.

● Average rents for Class A & B product continue to show strong support in the range of $10.00-$15.00/sf NNN or $20.00-$25.00/sf gross for the deals completed during the quarter. These averages have hovered near this range for more than a year.

● Vacancy in Camden County ticked down to 11.6 percent for the quarter, as prospecting activity improved.

● The vacancy rate in Philadelphia’s office market dropped slightly to 8.5 percent. The office vacancy rate is still near a 20-year low, and below that of comparable major cities.

● The industrial sector in Philadelphia remains very strong. Q1 saw vacancy rates at 5.5 percent, only slightly higher than the previous quarter. Net absorption dropped about 20 percent, to 4.3 million SF, which was still strong. Rent growth jumped again, to 5.3 percent. Rent growth for the past few quarters has far exceeded the long-term average of 1.7 percent.

● Retail may be most at risk from the crisis. Rising wages and low unemployment had been fueling retail spending, buoying the CRE market. But with unprecedented job loss and many businesses temporarily shuttered by stay-home orders, retail will bear the brunt. The vacancy rate inched up to 5.0 percent, while net absorption was negative 546,300 square feet over the last twelve months. These figures may well become more dire in Q2, as the true economic effects of the pandemic take hold.

● Retail vacancy in Camden County rose very slightly to 6.2 percent from 6.0 percent in Q4. While average rents rose to the range of $17.27/sf NNN.

● Retail vacancy in Burlington County ticked up a second consecutive quarter to 8.0 percent, with average rents in the range of $12.23/sf NNN.