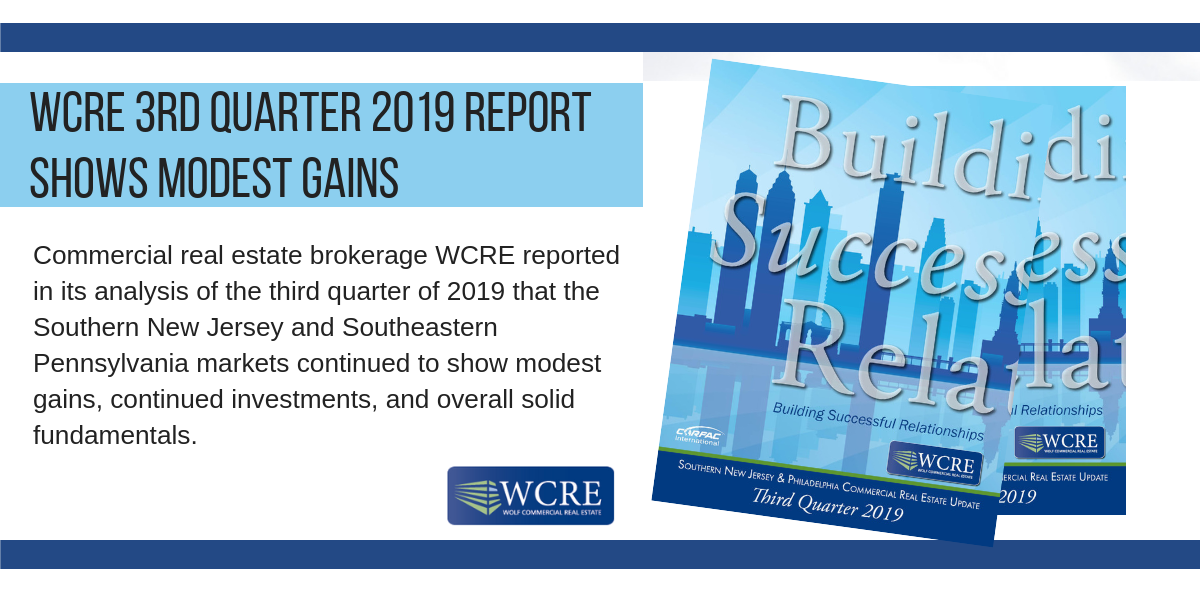 Commercial real estate brokerage WCRE reported in its analysis of the third quarter of 2019 that the Southern New Jersey and Southeastern Pennsylvania markets continued to show modest gains, continued investments, and overall solid fundamentals. Sales volume and prospecting activity held steady, leasing was up in Camden County, and especially in Cherry Hill, but dipped for the region overall. Gross leasing absorption was positive but trending lower quarter over quarter.

“We are in a continuing period of a strong economy with low unemployment. This has supported a long streak of slow, steady growth supported by strong fundamentals,” said Jason Wolf, founder and managing principal of WCRE. “Although a given indicator might fluctuate one quarter to the next, commercial real estate in this region remains strong, and there is reason to stay optimistic.”

There were approximately 266,867 square feet of new leases and renewals executed in the three counties surveyed (Burlington, Camden and Gloucester), which was a decrease of seven percent compared to the previous quarter. The sales market increased, with about 1.67 million square feet on the market or under agreement. However, completed sales slowed to approximately 329,769 square feet trading hands, less than half the previous quarter, which had been notably active.

New leasing activity accounted for approximately 36 percent of all deals for the three counties surveyed. Overall, gross leasing absorption for the third quarter was in the range 70,000 square feet, down from 150,000 in the second quarter.

Overall vacancy in the market is now approximately 11.50 percent, which is a slight uptick from the previous quarter. This is still near a 20-year low.

Average rents for Class A & B product continue to show strong support in the range of $10.00-$15.00/sf NNN or $20.00-$25.00/sf gross for the deals completed during the quarter. These averages have hovered near this range for more than a year.

Vacancy in Camden County dropped slightly to 11.1 percent for the quarter, back to where it stood in the first quarter.

WCRE has expanded into southeastern Pennsylvania, and the firm’s quarterly reports now include a section on transactions, rates, and news from Philadelphia and the suburbs. Highlights from the third quarter in Pennsylvania include:

The vacancy rate in Philadelphia’s office market dropped slightly to 8.6 percent, the second consecutive quarter to post a decrease of two tenths of a percent. The office vacancy rate is still near a 20-year low, and below that of comparable major cities.

Philadelphia retail is so far avoiding a major spike in vacancy due to the shift toward e-commerce. Rising wages and low unemployment are fueling retail spending, buoying the CRE market. The vacancy rate inched up to 4.7 percent, while net absorption was negative 562,000 square feet over the last twelve months.