Retrofitting your property with fire-suppression commercial sprinkler systems—or demanding their addition into your newly built property—might add expenses today but may help your firm achieve significant cost-savings in the long term. Having an up-to-date, effective and well-maintained sprinkler system will help you achieve significantly lower property insurance premiums, reduce losses in the event of a fire, and get your business up and running quicker post-loss. Consider adding sprinkler systems to protect your property—and your bottom line. 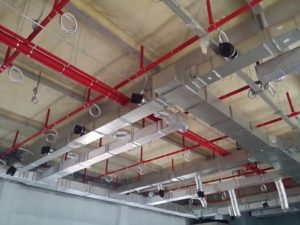 Fire-suppression commercial sprinkler systems are used to control or extinguish fires in the early stages. They help to mitigate the hazards for both building occupants and firefighters by spraying water directly on a fire source as soon as the sensor indicates a certain temperature has been reached. These systems could greatly decrease your losses in the case of a fire.

If your facility has special considerations, it might be important to explore a dry-pipe system. Dry-pipe commercial sprinkler systems are filled with air until activated, at which point the surrounding pressure changes, allowing water to flow through the pipes. Dry-pipe sprinkler systems are used in areas that are susceptible to freezing temperatures, or contain expensive equipment that should not be near water. Even less common systems include deluge, pre-action, foam water and water spray. Do some research to find out which type will best serve your business.

In considering the installation of commercial sprinkler systems, you are likely concerned about the cost. In reality, however, the cost to you would be much greater if a fire occurs and there are no sprinkler systems present. Sprinkler systems can save you money in many different ways, meaning that in the long run they pay for themselves.

The installation of a commercial sprinkler system in your building is a smart financial decision. It lowers the risk associated with the building, resulting in lower insurance premiums. It can also qualify a building for certain income tax reductions that it would not otherwise qualify for. For example, some of the income tax reductions your building could qualify for are depreciation allowance, interest on a loan and Qualified Rehabilitation Tax Credit. The latter is applicable to noncommercial buildings built prior to 1936 or designated as historical structures. While the installation of commercial sprinkler systems alone doesn’t qualify for a Qualified Rehabilitation Tax Credit, the expenses qualify for the credit as part of a renovation.

Liability is another reason for installing commercial sprinkler systems in your building. Research has shown that the public considers sprinkler systems a “reasonable level of care,” resulting in building owners having to pay out over $1 million per life lost in the event of a fire where a sprinkler system was not present.

Not only do commercial sprinkler systems save you money in the event of a fire—they are also an easy way to ensure that related building codes and laws are being adhered to. In order to be in compliance with the Life Safety Code, all high-rise apartments and office buildings must have either a full, operational sprinkler system or an engineered life safety system.

One big difference between the two is that the engineered life safety system does not pay for itself in the long run. Certain federal legislation applies to this subject as well, such as the Hotel and Motel Fire Safety Act of 1990 and the Americans with Disabilities Act. Keeping yourself in compliance with codes and laws surrounding sprinkler systems will save you potential headaches later on.

Because fires are a relatively common occurrence, it is important to protect yourself and your investments from damage. In addition to the benefits noted above, as a result of installing sprinkler systems in your properties you will also have peace of mind that your properties are safe and well-protected.