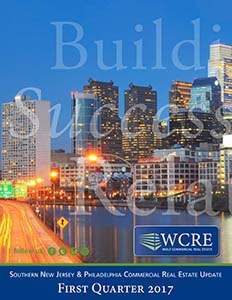 April 6, 2017 – Marlton, NJ – Commercial real estate brokerage WCRE reported in its latest quarterly analysis that despite political uncertainty at home and around the world, the Southern New Jersey market has started off 2017 on a cautiously optimistic footing.

“Even with an expected winter slowdown affecting office leasing activity, and added anxiety with the transfer of political power in Washington, the overall mood of the market seems to be positive,” said Jason Wolf, founder and managing principal of WCRE. “As we’ve seen the past couple of years, several business sectors increased their occupancy needs during the first quarter, and we continue to see increased capital spending, construction hiring, and expansions.”

There were approximately 317,886 square feet of new leases and renewals executed in the three counties surveyed (Burlington, Camden and Gloucester), which represents a decrease of approximately 18 percent compared with the previous quarter, but is essentially unchanged from the first quarter last year. While leasing slowed a bit, the sales market doubled in volume during the first quarter, with some 767,988 square feet worth more than $133.5 million trading hands. New leasing activity accounted for approximately half of all deals – a big increase over the fourth quarter. Overall, net absorption for the quarter was in the range of approximately 122,572 square feet.

Overall vacancy in the market is now approximately 11.05 percent, which is a nominal increase from the previous quarter.

Average rents for Class A & B product continue to show strong support in the range of $10.00-$14.50/sf NNN or $20.00-$24.50/sf gross for the deals completed during the quarter. This is essentially unchanged from the previous two quarters.

New Jersey’s unemployment rate moved down to 4.4 percent, putting it below the national rate of 4.7 percent.

Office demand in Center City is still exceptionally strong, as rental rates continue on an upswing and vacancy levels are compressing to all-time lows.

There is a significant amount of inventory of multi-family, including recently developed, under construction, and proposed, in both the City of Philadelphia and Philadelphia suburbs. Rental rates have either remained relatively stable or decreased slightly. Concessions are becoming commonplace at many apartment communities.

While much of the pricing for commercial real estate accounts for increasing interest rates, many purchasers are showing signs of hesitation and fears of potential decreases in market fundamentals.

The industrial market in the City of Philadelphia and its suburbs is fetching price points never experienced in the marketplace. The lack of available product coupled with significant demand is putting further upward pressure on overall pricing.

WCRE also reported on the Southern New Jersey retail market, noting an incongruous mix of consumers earning more and showing a willingness to spend, and a high number of retailers declaring bankruptcy. The report attributes this to a growing shift to online shopping and other changes in spending habits. Highlights from the retail section of the report include:

The Conference Board reports that consumer confidence is at its highest level since 2000.

Nine retailers filed bankruptcy in the first quarter, which is the same as the total for all of 2016.

Retail vacancy in Camden County stood at 6.4 percent, with average rents in the range of $12.92/sf NNN.

Retail vacancy in Burlington County stood at 11.1 percent, with average rents in the range of $12.31/sf NNN.

Retail vacancy in Gloucester County stood at 5 percent, with average rents in the range of $12.01sf NNN.