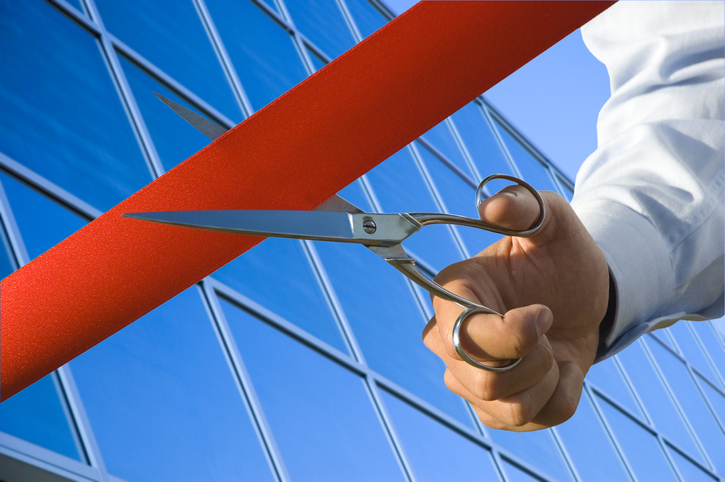 Commercial real estate developers and owners of recently completed development projects should be aware of a few things that can be done after the ribbon cutting to prevent headaches later on, avoid exposure to potential penalties for failing to comply with certain development conditions, and possibly put some money back in the till. Attention should be paid to these three issues after a project is completed.

OBTAIN AN AS-BUILT SURVEY OF YOUR PROJECT.

An as-built survey is a detailed land survey that includes exact locations of subsurface infrastructure such as pipes and foundations. Sometimes owners rely on contractor notes that have been scribbled on design plans in the field during construction to serve as an as-built. Incorporating these notes in a clean and accurate as-built survey is well worth the time and expense as it will save headaches trying to piece information together later.
An as-built survey should be prepared immediately after the project has been completed. A purchaser might also consider procuring an as-built if one is not available. Some might view this an unnecessary expense; however, consider the following:

1) what is actually built by the contractor in the field doesn’t always line up exactly with the engineering design plans;

2) preparing a clean survey to document as-built conditions immediately after construction eliminates the time consuming and often costly effort required to piece together the information at a later date; and

3) if, at a later date, you want to make improvements or put an addition on the property, having an accurate as-built survey of existing conditions shows exactly where everything is on your site and expedites the process.

As an example of how an accurate as-built survey can save time and money, consider a scenario in which an owner wishes to construct an addition to an existing building and tie a new sewer lateral into an existing underground sanitary sewer force main. The design plans for the addition are developed based on the original design plans for the main building rather than an as-built survey, because the owner never had an as-built survey completed after construction. The design plans for the addition referenced an ‘approximate’ location of the force main, as the ‘exact’ location was never documented. What if that force main was not in the location indicated
on the design plans? If not, it would require a lot of digging and an expensive subsurface utility investigation to locate the pipe to determine the exact location. This costly delay could be avoided if the owner invested in a complete and accurate as-built survey of the property immediately after construction, including the location of all underground infrastructure.

It is important that this condition is not overlooked, as the NJDEP has the authority to take enforcement action if permit conditions are not met. As stated in the Rules, any noncompliance with a permit constitutes a violation of the NJDEP rules and is grounds for enforcement action under N.J.A.C. 7:7A-22, which includes potential penalties and suspension and/or termination of a permit. In the case of a wetland delineation or verification letter of interpretation, termination of a permit may mean having to re-delineate the wetlands which can be expensive, time-consuming, and subject to a new interpretation.

CLOSE OUT YOUR ESCROW ACCOUNTS AND REQUEST RELEASE OF PERFORMANCE GUARANTEES

Under the Municipal Land Use Law, N.J.S.A. 40:55D-1 et seq. (MLUL), there is a specific process for closing out escrow accounts and requesting release of performance guarantees. For application review escrow accounts, once the approving authority has signed the subdivision plat or site plan, or for inspection escrow accounts, once the work is completed, the commercial real estate developers are to send a written notice by certificated mail to the chief financial officer (CFO) of the municipality, to the approving authority, and to the relevant municipal professionals. After such notice is transmitted to the appropriate parties, the professionals are to submit a final bill to the CFO of the municipality within 30 days, with a copy to the developer. The CFO of the municipality must render a written final accounting to the commercial real estate developer on the uses to which the deposit was put within 45 days of receipt of the final bills. Any balances remaining in the deposit or escrow account, with any interest, must be refunded to the developer along with the final accounting. See N.J.S.A. 40:55D-53.2.

For performance guarantees, upon substantial completion of all required street improvements (except for the top course) and appurtenant utility improvements, and the connection of same to the public system, the commercial real estate developers may submit a request by certified mail to the governing body to the attention of the municipal clerk, with a copy to the municipal engineer, for the municipal engineer to prepare a list of all uncompleted or unsatisfactory bonded improvements. That request should specify which of the bonded improvements have been completed or remain uncompleted in the opinion of the developer. In response to the request the municipal engineer is to inspect all bonded improvements and submit a detailed list and report, in writing, to the governing body, with a copy to the developer, within 45 days after receipt of the request. Simply put, depending on the outcome of the inspection, the performance guarantee may be either released or reduced by a specific amount, commensurate with the remaining work. If the municipal engineer fails to send or provide the list and report as requested within 45 days from receipt of the request, the commercial real estate developer may seek a court order compelling the engineer to provide the list and report within a set time and may also be reimbursed for the cost of applying to the court, including reasonable attorney’s fees. See N.J.S.A. 40:55D-53.

Following up on these three issues after a project is completed can save time, money and headaches. For more information on any of these topics, contact Rod Ritchie or Bob Baranowski for assistance.