January 12, 2016 – Marlton, NJ – Commercial real estate brokerage WCRE reported in its latest quarterly analysis that the fourth quarter of 2015 saw the market tap the brakes a bit for the first time in an otherwise strong year in Southern New Jersey. The report noted that there were hints of a slow-down, even while the overall market still showed gradual improvement and expansion, and bellwether companies remained active.

The fourth quarter featured a mixed bag of results, some of which may have been caused by the Fed’s recent decision to raise interest rates for the first time in nearly a decade, and/or by volatility in the financial markets. Positive news included several large leases and renewals above 40,000 SF, signs of increasing new construction for the first time in years, and new investors entering the market. In less encouraging news, there were approximately 384,906 square feet of new leases and renewals executed in the three counties surveyed, which represents a drop of +/- 20 percent compared with the fourth quarter of 2014. Along with a slower pace of transactions, there has been a drop in prospecting, with about 250,000 SF of lease deals in the pipeline and expected to close in the near term.

However, even with the drop in transactions, positive absorption continued, making up approximately 130,202 square feet of total activity. Vacancy rates continued to improve, as well.

“2015 was a strong year for our market, although we began to see more caution amid the optimism during the fourth quarter,” said Jason Wolf, founder and managing principal of WCRE. “The question for 2016 will be whether our market has rebounded to a point where it can ride out some short-term changes and remain strong.”

Last year WCRE expanded into southeastern Pennsylvania, and the firm’s quarterly reports now include a section on transactions, rates, and news from Philadelphia and the suburbs. Highlights from the fourth quarter Pennsylvania section include:

WCRE also reported on the Southern New Jersey retail market, noting mixed results there, as well. Highlights from the retail section of the report include: 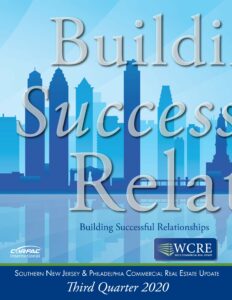