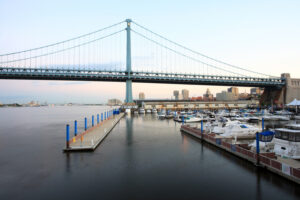 The Durst Organization of New York has been selected to redevelop Penn’s Landing, likely ending efforts by the 76ers to build themselves a new basketball arena there.

The board of the Delaware River Waterfront Corp., the agency that oversees development along central Philadelphia’s Delaware River waterfront, voted at a meeting Wednesday to choose the Durst group as the site’s developer.