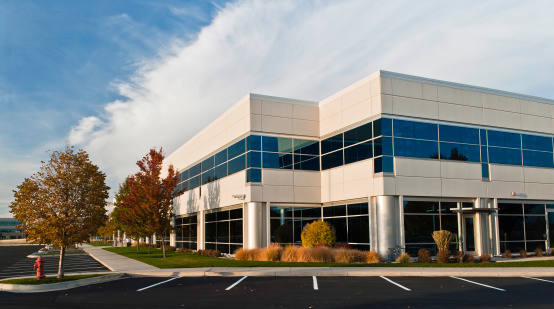 Blue Bell, PA offers Commercial Real Estate in a historic and affluent Montgomery County community. The community of Blue Bell – an unincorporated census-designated place (CDP) within Whitpain Township, Pennsylvania – is one of the oldest settlements in the state and one of the most desirable places to live, especially for its valuable tracts of commercial real estate.

Whitpain Township was part of a 4,500-acre (7-square-mile) tract of land that London butcher Richard Whitpaine purchased from William Penn in 1682. Whitpaine’s son Zechariah was 16 years old when he traveled to Pennsylvania later that year to settle the property. Zechariah built a plantation house along the Wissahickon Creek and lived there with his wife, Sarah Songhurst, whom he met onboard ship during his journey to America.

The Blue Bell section of Whitpain Township originally was called Pigeontown for the large flocks of the now-extinct passenger pigeons that once inhabited the area. The name was changed in 1840 to honor a local establishment – The Blue Bell Inn – which still is in operation today.

The inn – first opened in 1743 as a hotel for those who traveled to the area to hunt passenger pigeons – was then known as The White House. In 1777, following his loss of the Battle of Germantown, George Washington stayed at the inn while his troops made camp in Pigeontown. During that encampment, Washington also spent time at Dawesfield, a home on Lewis Lane near the inn. Dawesfield was added to the National Register of Historic Places in 1991.

The Blue Bell Inn received its current name in 1840 when a bell tower was installed above the hotel and became the centerpiece of the town. The facility operated as a guest house until 1967 when it was converted to a restaurant, a role it continues to serve today. Currently, the establishment’s upscale menu ranges from Buttermilk Pancakes and Roman Frittata for brunch, to Ahi Tuna Tartare and Margherita Flatbread for lunch, to Cheesesteak Dumplings and Roasted Branzino for dinner.

The Blue Bell section of Whitpain Township is home to many office parks and corporate headquarters among its array of Montgomery County commercial real estate. Two of the largest employers in the area are Aetna, Inc., a managed health care company that also sells medical, pharmaceutical, dental, behavioral health, long-term care, and disability insurance plans; and Montgomery County Community College, a two-year institution of higher learning established more than five decades ago and now offers more than 100 different types of Associates degrees and certificates.

Blue Bell and Whitpain Township also are home to Wings Field, a general aviation airport that was founded in 1930 and was the headquarters of the now-worldwide Aircraft Owners and Pilots Association when that organization was formed in 1939. Wings Field has one asphalt runway and sees an average of 100 takeoffs and landings each day.